We know as a network we do bring thousands of children and young people from different communities together through the school year and there is interest in the pathways to extend this work to parents and communities. In this area of the website we want to share strategies and ideas and resources that help.

We love seeing the different ways those involved in facilitating the Schools Linking Programme across the national network communicate and engage with families and their local community. Lots of schools share their linking journey through their school website or twitter, others use newsletters or displays in schools and many put on assemblies where children share their stories and experiences of linking to their families. The TLN team try and provide as much support as possible and we have resources available to help including letter templates and assembly ideas.

The activities are different in each area, below are a selection of stories of what some local areas have got up to so far

Building Bridges deliver the Schools Linking programme in the Pendle area and worked with partners to deliver a series of get-togethers for pupils and parents called Families Making Friends. Families from 6 of the schools who have been part of the programme participated in the activities. The first event had 72 parents and children participating and there was a great mix of families from different backgrounds and from the different parts of the area, some of these families told us they don’t get many opportunities to meet people different to themselves, ‘Parents tend to live in their own communities and don’t always get the opportunity to mix and It was lovely to talk to other mums from different cultures’. At the initial event children participated in a shared art activity sharing their ideas of what the area could offer children and parents joined in an open dialogue with each other using Talkeoke (is a pop up talk show where any can sit down and air their views around the table of chat). Talkeoke is a fun and exciting way to have a debate, conversation or discussion about the things that matter. Parents discussed how they feel about the local area, why people don’t tend to mix often with others different to themselves and how they could create opportunities to get to know each other more. The initial event was followed by several smaller workshops which were well received. The team feel that those involved are able to advocate the need for cross-cultural engagement and have also become  a resource to build upon to further advance the need for community action and to tackle barriers towards integration.

In preparation for Remembrance Sunday the TLN team in Bradford worked in partnership with Bradford Council and the Remember Together initiative led by London Think Tank British Futures and the British Legion. We were delighted that our very first linking pair of schools, Girlington Primary and Eldwick Primary Schools continue to link and in November 2018 they came together and reflected on the diversity of the troops who fought in World War 1. Pupils looked at the stories of individual soldiers to learn more about the sacrifices made. We also made some giant poppies together which we brought to the Cenotaph in Bradford City Centre on Remembrance Sunday. Pupils from both schools along with the families attended and children laid the wreaths together and attended both the service and a reception afterwards hosted by the Lord Mayor.  We used materials and lesson plans created by TLN and British Futures. The schools feedback was very positive, in particular they felt that the activities brought to life the contributions of people who are often overlooked.

During the summer term, we invited parents of our linked school pupils to meet each other. Parents from Cracoe and Rylstone Primary School and Dixon’s MusicPrimary in Bradford experienced an adult version of their children’s neutral venue visit at Cliffe Castle in Keighley which everyone loved. Parents from Sacred Heart Primary in Ilkley were welcomed at Brackenhill Primary School in Bradford where they did a silk painting of their children. Parents from Nessfield Primary School (now Beckfoot Nessfield Primary School) in Keighley came together over a number of sessions and worked with an artist to produce a collage of all their favourite things in the local community to be displayed in school.

The Linking Network also supported a joint community clean-up between children, young people and their families from local churches and a mosque. The young people were keen to create some social action to take part in and to work alongside others in the community to do this. Those involved gathered mid-afternoon on a Saturday afternoon and after some ice-breakers led by the TLN team participants were split into smaller groups and spread out across the local streets and collected litter from the pavements and communal areas. Lovely conversations took place as litter was collected, both with each other and with members of the public. The response was positive from people living in the local area who were appreciative of the efforts made. Participants finished the day by sharing a curry together and getting to know each other more during a dialogue session facilitated by interfaith organisation, The Feast. We found a focus on social action a great way to engage with people who otherwise might not meet.

Yorkshire Spirit lead the Schools Linking programme in the Kirklees area and during 2018 ran a project called Carry My Story. All schools were encouraged to involve parents and families to contribute to the collection of stories and experiences of parents, cares and families in addition to community members.The stories could be anything which was significant in the person’s life and which echoed the 4 key questions central to the Schools Linking Programme (Who am I? Who are we? Where do we live? How do we all live together?). Children learnt interviewing skills and the stories were reflected in artwork and poetry which was created in school. A selection of the stories were shared at the Carry My Story Celebration event which was very well attended by schools, families and local community groups and organisations including members of a local refugee support group, an elderly people’s residential home and family members of all ages! Schools presented a selection of their favourite stories in a marketplace around the venue which brought the stories to life. Some of those involved shared their reflections,‘I think it’s very important share histories of people who live in our communities. It shows diversity but it shows what we have in common’. One of those whose story was featured told us, ‘I loved talking to students at Batley Girls’ High School and I loved seeing my story ‘carried’ by Windmill School.’ 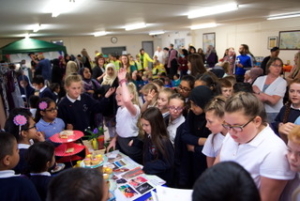 The schools involved felt the project has had a big impact on the children, families and communities involved, ‘‘I was delighted that out of 24 children, 20 family members got directly involved in the identity work. Traditionally it’s very difficult to get families involved in projects at this school’. The project has been adapted and is being run again this year with local schools.

We can’t wait to share with you more stories from the activities taking place this year to bring together pupils, their families and local communities.