Beatrice Tate School is a secondary special school in Tower Hamlets, the students involved in linking were Year 10 and 11 (Key Stage 4) and beyond (17–19 years old).

Three class teachers from Beatrice Tate School were actively involved in the training and class activities of the Linking Project this year, one of the class teachers said she considers the work to have been an extremely positive experience for her learners. She can see that all her students were really excited to meet their peers from another school and excited to go out into the community, to places where usually they might not have the chance to go. It was clear that the students’ awareness of their own community increased, as well as their awareness of their own school. They were very proud to say they were from Beatrice Tate School and to engage in chatting about what is available in their community.

The students each made personal booklets and exchanged them with their linking partners. Everyday similarities and differences were explored; this process was kept quite simple and light to begin with, to help build commonality and an acceptance that not everyone is the same.

The work then moved on to a focus of Life Skills, part of the curriculum in special schools. A very important part of life skills is to know what is available in the community, to have links to people sharing the same community, to meet and communicate with new people, including students from other schools. During the Neutral Venue visit to Rich Mix Beatrice Tate students met with Morpeth School students for the first time and this afforded the opportunity to chat and communicate with people neither set of students knew beforehand.

Over the time span of the project the students have developed their knowledge of communicating with others dramatically. Lots of practice and scaffolding went into making this happen. Role play of things that they might want to say and ask meant that the students were well prepared when a real-life opportunity was provided through the Linking Project. The class teacher was hugely impressed because all of the students did really well and felt ready to meet new people, even those who usually feel quite shy. The work that was done in preparation had real life application through the project. ‘It was a joy to see the students so proud of their work and their progress’, she commented.

A sense of equality between the Beatrice Tate School students and Morpeth School’s special need class was created through the preparation work in both schools. This centered on how to behave when meeting unfamiliar people. There was an emphasis on living in the same community, even though the students attend different schools. That sense of belonging to one Tower Hamlets was used to build commonality, respect and cohesiveness.

Over the linking year, several exchanges of work have taken place between the students. The Linking Network classroom resources were adapted to work with the special school students, where appropriate. However, most students at Beatrice Tate School do not write but use communicating print, where words have pictures attached to each word. The personal booklets used communicating print to support writing and reading.

The highlights of the work so far have been visiting Morpeth School and making the personal booklets for the partner school students. Exchanging the work was exciting for the students and the teachers too. Having fun together, with new friends from different walks of life, has been a memorable experience. The second meeting in a park consisted of playing sports together and chatting and it was, above all, really good fun.

Meeting up at Meath Gardens and having fun.

The plan for the future is to continue the work next year and build on the linking relationship. One idea under consideration is to have a day per term dedicated to linking; this would be planned and timetabled. These meetings would be kept fun and enjoyable, because once the work gets too academic this might have the undesirable effect of focusing everyone on the differences and could become counter-productive.

Beatrice Tate School would like to use more places in the community, such as the library, local park, youth centre, college or cinema complex. This is an important consideration both in terms of widening the Beatrice Tate student’s horizons and because, as special needs students, the learners from both schools are bound to cross each other’s paths in the future. ‘It’s very good that they meet now and will recognize each other when they encounter new situations later on.’

Additionally, not all parents are able to take the students out into the community and through this work the students would be able to get to know community facilities, such as the parks, libraries and other public spaces. The hope is that with positive experiences of community spaces the young people themselves will ask to be taken again by parents, carers or be- frienders. In terms of preparation for positive futures it is essential that young people with special needs know their communities and have positive experiences of public spaces. ‘Even better would be if staff remember our young people when they go again’.

Phoenix Primary and Secondary School is a special school in Tower Hamlets, London. It serves children between 3 and 19 years with severe language and communication difficulties whose needs lie within the autistic spectrum. The school leadership at Marner Primary got involved in the Tower Hamlets Linking Project with the aim of strengthening relationships between Marner Primary and Phoenix School. One way of strengthening this relationship is through the satellite classes.

The satellite model provides support for children with special educational needs in a mainstream setting. The Phoenix School primary satellite classes are based at Marner Primary, housed in the same building, but they felt remote to Marner Primary staff and children. Creating this stronger connection was the main motivation for being part of a bigger project.

The Year 3 and 4 children in the primary satellite have been involved in the Linking Project over the 2018 / 2019 school year. There were eight pupils in the class and these pupils have been given a ‘link buddy’ from the mainstream Y3 Marner Primary class. This has proven a highly successful approach and the ease of engaging with pupils on the same physical site has been a great advantage. This has enabled the children to get together regularly in the classroom as well as continue their friendships in the playground.

A main skill focus for this project was developing communication. Before the link when they went to the playground the satellite class really kept to themselves. Over time the children have become more confident in talking to other children in the playground – not just their buddies but friends of their buddies too. They are now taking part in games and conversations in bigger groups. This is not only building communication skills but building confidence too. The class teacher saw her pupils seeking out their buddies and starting to initiate games or conversations. As the year progressed, this change became even more pronounced   – ‘they go out into the playground, recognise a lot more people, are more confident in approaching others and it now feels like they belong, as part of the school.’ There has also been an impact on the values of the learners from both schools. ‘Definitely, our pupils are more respected as the Marner Primary pupils are more aware of their needs. They are very caring.’ 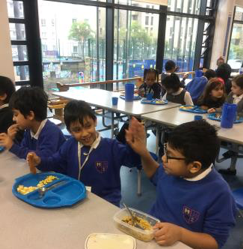 The Linking Network resources have been used with adaptations, where necessary, so that  the activities flowed and all the children were more able to access the same task.   Both the Phoenix School teachers and the Marner Primary teachers consider these linking encounters to be a chance to develop great skills for life. It’s important that the mainstream pupils have the chance to learn to be more patient and to allow for differences in ability and styles.

A major focus of the curriculum work this year has been the book Wonder by RJ Palacio. Both linked classes used this book to look at similarities and differences, in ourselves and others. The pupils created portraits of characters featured in the story and these are planned to be displayed at Marner, with work from pupils in both classes displayed together.

One very important development over the linking year was the establishment of a ‘girls’ group’.   The Phoenix School class contained only one girl and the Girls’ Group was established to enable her to make some girl friends at school. The group takes place every Wednesday lunchtime and girls from Marner Primary class 3B, including girls who are not buddies but want to be more involved, take part. The teachers have noticed positive changes in the girl who was isolated, since the group started.

The only challenges faced have been the logistics of taking a group from 3B to visit Phoenix.  Plans for the future include widening the participation of learners in both schools by extending the linking to the new Y5 /6, as well as continuing the work with the new Year 3.

This has been a very successful trial that provides a number of learning points and replicable features for other contexts. The impact on teachers’ and pupils’ daily lives through the small changes brought about by the project cannot be under-estimated. Inclusion and a sense of belonging form the centre-point of our work, both for HEC Global Learning Centre and The Linking Network. Providing a project framework that can facilitate spaces where special need pupils are included has afforded opportunities for growth for all.

‘Our children share the locality they inhabit. Linking has brought them into a space that uncovers the wealth of intangible diversity within this locality– the diversity of world views, of multiple solutions to a problem, of forms of self-expression.’

With many thanks to HEC Global Learning Centre and all of the Tower Hamlets staff and students involved in bringing together this fabulous linking! Please click here for the full Tower Hamlets Linking Report