Many of us have loved and shared the debut book by Onjali Rauf, ‘The Boy at the Back of the Class’. The story depicts a young refugee, Ahmet, who has been separated from his family and follows the adventure of how his classmates try and help him reconnect with his loved ones. The novel helps children understand the refugee crisis and for many, inspired them to take steps to create change. The book is important not only for being a great book which children love but also for the issues it raises and also for featuring a Syrian child as the lead protagonist given the shocking statistics that only 1% of children’s fiction have a lead character who is Black or from a minority ethnic background.

Onjali recently recorded a Tedx talk at LondonWomen where she shares how her own love of stories started when she was young and the magic books held for her as an 8 year old girl reading long after lights out.

Critics have suggested that the topic of refugees might be too much for children but in her talk she shares the responses from children who have read her book and the actions they have taken as a result, 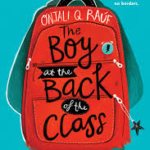 seeking for solutions to end the refugee crisis depicted in the book. She describes how children have an innate sense of justice which adults have often lost, ‘the eight year old version of ourselves would never look away from things we know to be wrong’.It’s a great reminder of how children can inspire us with their expectations of equality and fairness for all and of the energy they bring when turning good intentions into actions, knowing that even small steps can make a difference.

The Tedx talk is available online and lasts 11:26 mins https://www.ted.com/talks/onjali_rauf_why_children_are_our_most_powerful_hope_for_change