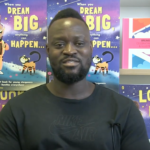 Sharing books for children and young people which feature diverse central characters is really important to us. A study undertaken in 2017 by the Centre for Literacy in Primary Education (CLPE) funded by Arts Council England, asked UK publishers to submit books featuring BAME characters in 2017. Of the 9,115 children’s books published last year, researchers found that only 391 – 4% – featured BAME characters. Just 1% had a BAME main character, and a quarter of the books submitted only featured diversity in their background casts. In 2018 the DofE figures showed that 32.1% of UK children attending school are from BME ethnic origins.
We haven’t had a chance to read the book yet but here’s a great interview with illustrator Dapo Adeola @DapsDraws about the new book ‘Look Up’ written by @NathanBryon about the importance of all children seeing themselves represented in literature. Dapo Adeola spoke about the issue of representation, ‘I saw myself reflected in terms of my characteristics and how I am as a person in terms of my ambition, imagination and the things that I wanted to do. Did I see myself visually as a person? No, not at all. There were no characters that I can recall in any picture books growing up that looked like me.’ When asked about the impact of the lack of diverse characters he added, ‘I feel that if we are only given one image of ourselves, it severely limits our aspirations as people.’
The interview carried out by The Book Trust can be found here youtu.be/CXqi1kYHSQ4
What are your favourite books featuring non-white central characters which you’d recommend to others?
News Home