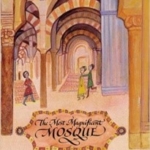 Visitors to the mosque at Cordoba are plagued by the tricks of three boys: Rashid, who is Muslim, Samuel who is Jewish and Miguel who is Christian. One day, they go one step too far and as a punishment, they are forced to work in the mosque gardens, where they develop a deep sense of the building’s beauty and significance. Many years later, when the Christian king threatens to demolish the Mosque of Cordoba and build a church in its place, the three friends reunite to hatch a plan to save the great mosque… Ann Jungman’s story demonstrates what can be achieved when people work together and don’t waste energy hating each other.